How We Cleared the Ottawa Rogaine

Experience has taught us that preparation prior to the race is key. Hydration and nutrition are probably the most important components of any race strategy. We each carried about one and a half litres of water and between us we had 8 Gu Gels, 3 Power Bars, 2 Cliff Bars, 4 granola bars and four packs of electrolyte drink mix. In the 20 minutes allotted before the start of the race, we understood that it was critical to plan our route carefully; use trails as often as possible, minimize the climb, and climb early if possible. This year’s race had an urban component, so we decided to save it for last when the fatigue and 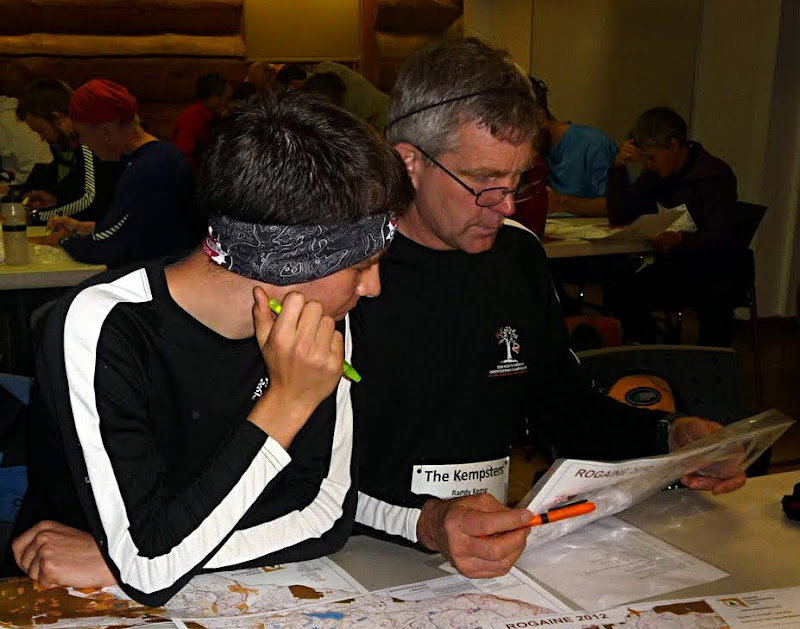 cramping were sure to be a problem. To win the race we knew that our route plan needed to include all the controls on the map and if we ran out of time, we would just cut-off early and get back inside the 8 hour time limit.

James and Linda Connell were quite devious in setting the control locations for this year’s Rogaine. It was very difficult to plan an efficient route to all the control locations in the south west sector of the map. This section was entirely wooded and quite hilly. From the start, we went north around the pond grabbing control points (CP’s) 32, 36, 84, 50, and then back south to 37 and 54. That’s 293 points in 2.1 km with 35 metres climb; total lapsed time was 22 minutes. It was a good start to the race. 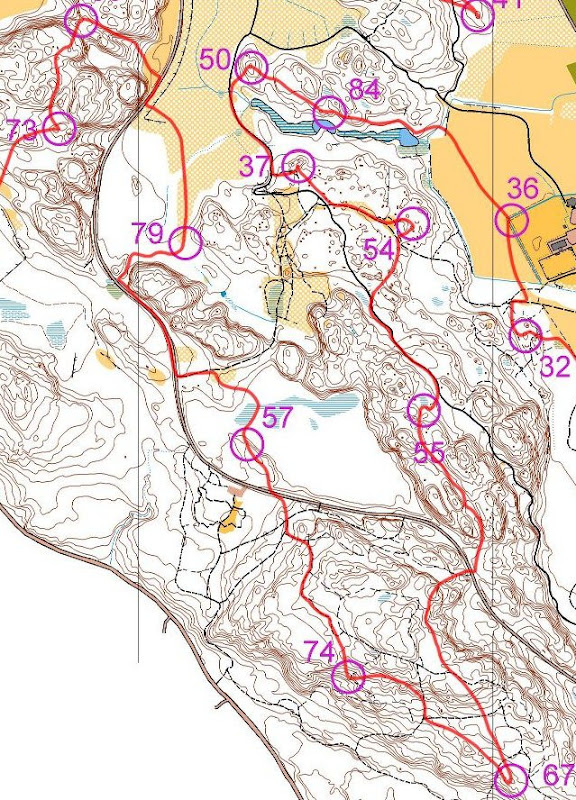 There were no obvious trail routes from 55 to 67 then to 74. The latter two were probably the most technically difficult control locations of the entire race. It is at times like this that it pays to have a teammate who is an elite Canadian Orienteer!! In spite of the 100 metres of climb and the technical nature of the terrain, we were still able to average 10.5 minutes per km (mpk).

The next 11 control points, 57, 79, 69, 60, 79, 69, 72, 33, 43, 58, and 64, were mostly road and trail runs but with four moderate climbs to CP’s 60, 33, 43 and 64, each about 50 metres. Total distance was 7.2 km with an aggregate 250 metres climb in 61 minutes. Average pace was a blazing 7.2 mpk. Our initial route planning really paid off in this section. It was also at this time that I conceded that I was the weak link in the team. I decided to swallow my pride and began to hold on to the back of Eric’s pack with one hand. He would pull me along on the roads and wide trails. This system was especially effective climbing up hills, including the road run up Pink! This simple arrangement made all the difference in the race.

At CP 64 we were two hours in and about 6.7 km from the next water station. The next 8 control points, 75, 83, 76, 47, 68, 51, 44, 49, required careful orienteering into the control circles and some extra grit up the steep 200 metres of climb. The first signs of cramping were starting to appear at this point, especially in my calf muscles. We bobbled the attack from the road into CP 83 but quickly corrected. We were able to maintain 10 mpk and when we arrived at the water station at CP 49 we took a few minutes to rest, popped a couple of gels and ate a Power Bar… I bloody well needed it!!

Fed and watered, hurting a little bit and three hours into the race, the next hour was going to make or break the race for us. Another 200 metres of climb over 6 km would take us through control points 78, 65, 86, 59, 42, and a road run to CP 80. Although we averaged just under 10 mpk, we stopped often to stretch out the legs and alleviate the persistent cramping. Eric was doing all of the orienteering at this point and I was concentrating on staying alive!!

CP 80 was a milestone because it was at this point that we started to head back south towards the finish line, albeit 24 km away. The next five controls were relatively easy for me. It seemed to be downhill most of the time and Eric was consistently spiking the controls. It took us 45 minutes to collect 45, 82, 87, 39, and 88. Average pace was just under 10 mpk. We had descended a total of 90 metres to Notch Road and in a way, it was almost a restful part of the race.

The next three controls, 62, 85, 52, were physically difficult. It included 90 metres of climb over 2.4 km. Cramping and fatigue were a problem and most of the running was through the woods or on narrow trails…thus I couldn’t hang on to Eric’s pack and let him pull me along. I was on my own! We were popping gels and eating Power Bars through this section just to avoid bonking. Our pace slowed to 11 mpk.

From CP 52 we went straight out to the trail to the water station at CP 38 and sat down and rested. We were five and a half hours into the race and I was exhausted. We took the next 8 minutes to plan the remainder of the course while eating and drinking. We had 16 controls to collect over the 15 km to the finish line and just over two hours to do it. We were feeling quite confident that we could finish with time to spare. 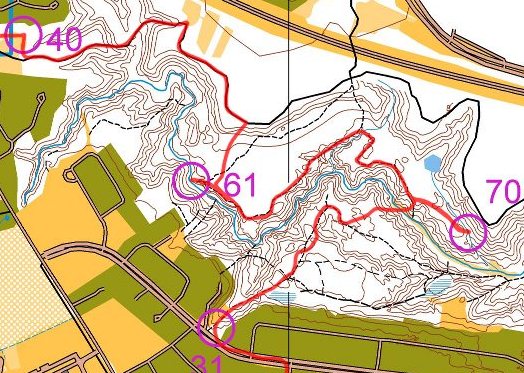 The next three controls, 61, 70 and 31 presented some real challenges in terms of route choice. The area is primarily a giant gully with thick woods on both sides. We opted to run the trails along the top of the ridge to each of the controls rather than try to bushwhack in a straight line through the thick forest. The trails were very windy and the distances seemed long; interestingly, straight line distances between the CP’s was 2 km, but our total running distance was 3.8 km. Total time through this section was 35 minutes; unfortunately we had lost precious time here. That left us with an hour and 15 minutes to get to the finish.

We popped our last two gels at CP 31 and headed out on the remaining 10 km through the urban area of the map. Hard surfaces take a toll on the body and so this part of the race really hurt. We cruised through control points 30, 46, 63, and 81 but the road run to 77 was excruciating. We had run out of water and the only remaining food that we had were two granola bars which were too difficult to eat. The stretch from CP 77 to CP 66 was the lowest point in the race. In spite of hanging on to Eric’s pack, I was having difficulty standing up, my knees were starting to really wobble and I was becoming slightly delusional. My primary focus was not to stop running until we hit Saint-Raymond Blvd just one km away. With our best effort, we managed 6 mpk.

After we crossed the road, we decided to attack CP 66 straight through the swamp. It was awful. We had to hack and crawl our way through the extremely thick vegetation. Time was tight and there was no going back to the road to run an alternate route around the swamp and so we persevered. It took us almost 5 minutes to travel 250 m.

One control left to go, CP 35. Of the eight hours we had just over 10 minutes left to cover the final 1.2 km to the finish line. Piece of cake, right? Heck No!! I was on the verge of death!! It was too difficult to run or even jog. My legs were burning from the lactic acid, my feet hurt and the inside of my mouth felt like it was covered in a thick paste. We arrived at the edge of the parking lot about 200 metres from the finish line and heard Linda Connell call out “30 seconds remaining”. We had no choice, we had to run! 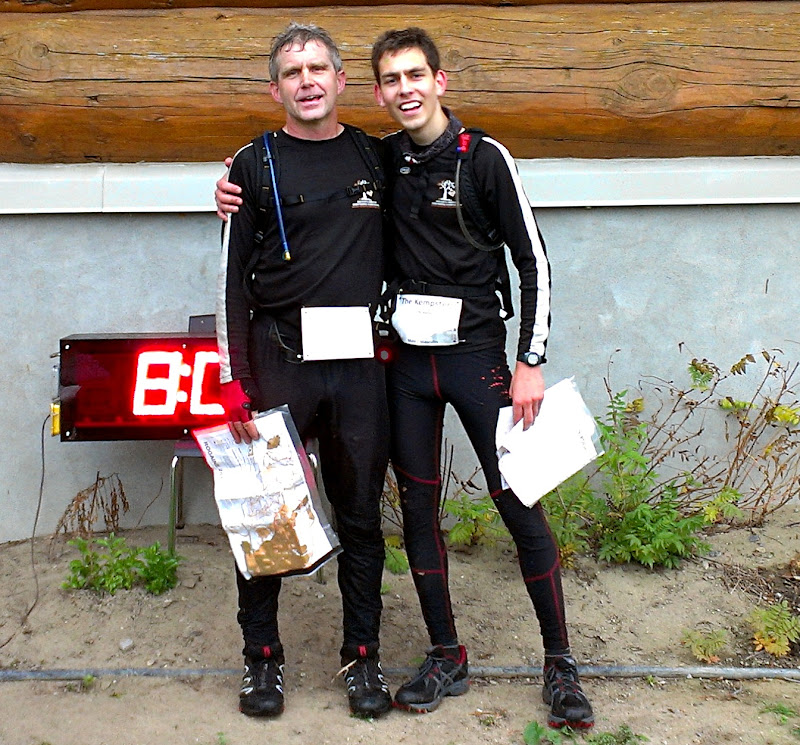 We arrived at the finish line with just a few seconds to spare. To our surprise we were the only team to sweep the map in 8 hours. The final stats for the race were 58 control points collected for a total score of 3433 points, total distance of 51.4 km with a total climb of 1 050 metres. The average pace was 9.3 mpk.

There is no doubt that Eric could have run the entire course alone in a much shorter time than it took us together. But Rogaine racing is a team sport and success is only measured by the entire team crossing the finish line. Eric literally carried his “old man” that day, and because he did, we are able to share one of life’s epic adventures together. 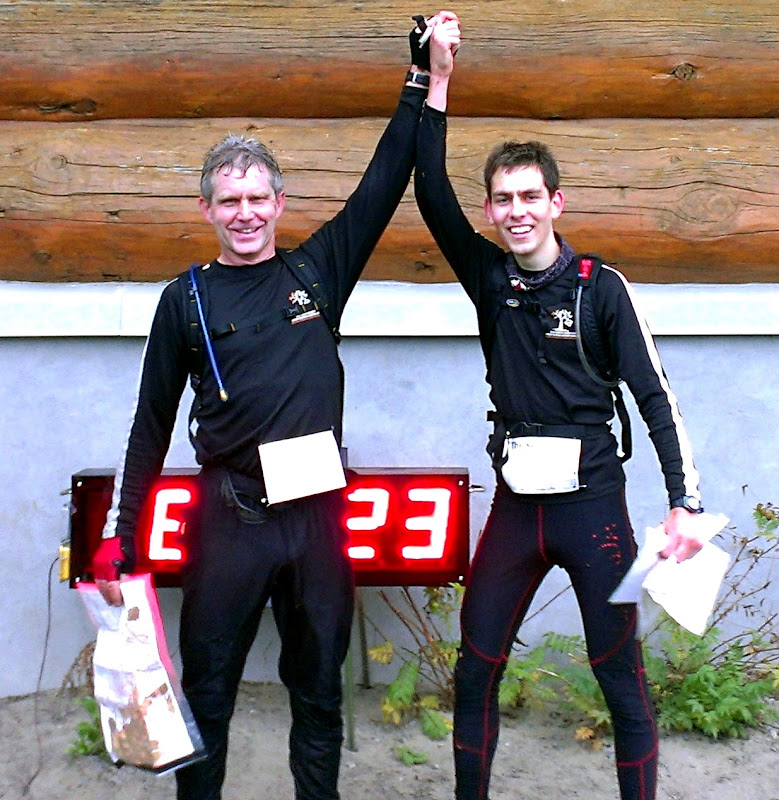